At 8:56, June 28, loaded with passengers, a Fuxing bullet train (G9394) left Hefei South Railway Station and made its debut on the Hefei-Huzhou line, marking the successful launch of the Hefei-Huzhou section of the Shangqiu-Hefei-Hangzhou high-speed railway route. It also means that Hefei, Wuhu and Xuancheng have entered the “One Hour Economic Circle”, and that Henan, Anhui and Zhejiang have been connected with each other by high-speed railway. 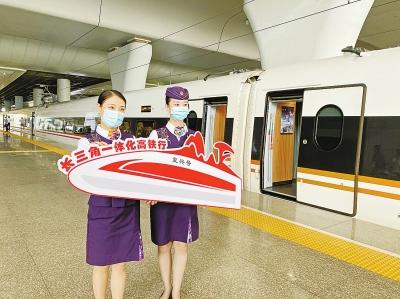 On hearing that June 28 was the first day for Wuhu-Xuancheng line, Xiang Shijuan, whose hometown is Langxi, specially asked for 3 days’ leave to experience the first high-speed train to her hometown with her 4-year-old son. Xiang said excitedly，“I’ve been looking forward to its launch for years.” To experience the speed of the high-speed train, she bought tickets and took the first train with her son. “In the past, it usually took more than 4 hours to go back home by taking a regular passenger train or a bus and my son was also reluctant to do so. Now, it only takes 1 hour and 13 minutes, which is more convenient. In the future, I can visit my parents more often!” 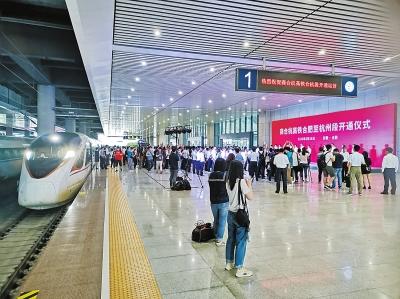 According to Song Xiangqing, deputy director of the Commerce Economy Association of China, the Shangqiu-Hefei-Hangzhou high-speed railway has connected Henan, Anhui and Zhejiang, and become a “fast channel” linking Jianghuai area and Yangtze River Delta region, which is of great significance to promote the coordinated development of regional economy in Central China and enhance people’s travel experience. Henan’s “star-shaped” railway network and “friend circle” have continued to expand.